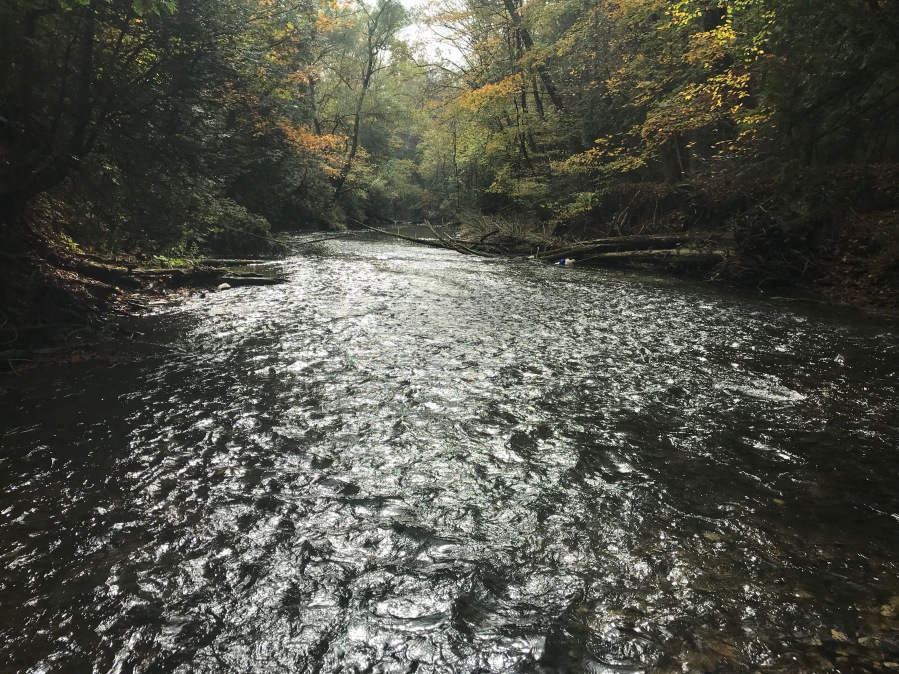 I made my first attempt at some early Autumn Steelhead this past weekend. Water temps and levels are not optimum but some streams with cold water inputs will tempt early runs of Steelhead during warmer weather. We have had some rain over the past week and can be even more tempting to the “Silver Ghosts” into making an appearance.

I usually don’t attempt much Steelhead angling until a hard frost or two. This will help push the water temperature down from summertime levels. We have not been close to a frost yet so I knew conditions were going to be less than optimum.

One advantage of visiting your favourite stream or river during low water is to see any new features from your last visit. It’s been a few months since I visited this stream. It was great to see many of my favourite “drifts” and a few new ones. Many local tributaries are well forested and have lots of woody cover and sandy banks. This makes these channels very dynamic and changes to channel morphology can be considerable at times.

One Steelhead showed up on my visit but was camera shy. Even though the Steelhead were shy there was lots of action with dozens of 2 year old Steelhead (Raimbow Trout) and a few young-of-the-year Coho Salmon caught today. I was also pleased to hook and release a couple resident Brown Trout.  These pretty Salmonids are a real treasure!

It’s looking like it may be a few weeks before we are in the midst of traditional Steelheading weather. Either way, it was a pleasure getting out on a beautiful autumn day.

Error: Twitter did not respond. Please wait a few minutes and refresh this page.