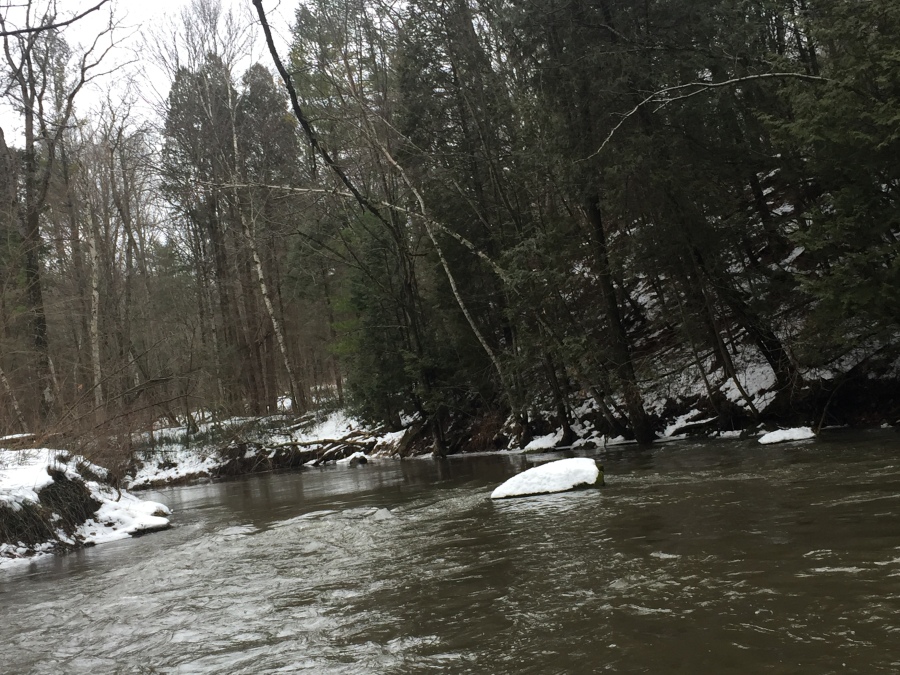 Like many die-hard Steelhead anglers, I live and die by a hydrogaph. Many anglers ask me,  “what is a hydrograph?” or will ask me “how does it help you with your fishing?”. I will do my best to answer some of these questions. What is a hydrograph? According to the United States Geologic Survey a hydrograph is relating stage, flow, velocity, or other characteristics of water with respect to time. Hydrographs are generated from data collected a stream gauging stations. A gauging station is a site on a stream, canal, lake, or reservoir where systematic observations of gauge height (water level) or discharge are obtained. These stations are important for resource planners and managers to manage water levels. Having knowledge of water resources is important to protect people and property from high water (i.e. flooding).

Why do gauging stations respond differently within one watershed?

Another great source for Ontario Steelhead anglers is the Environment Canada real-time hydrometric website. This website has a collection of over 1800 real-time locations across Canada. This data is collected by the Water Survey of Canada. From the main website you can search by province  and waterbody, click here.  I prefer the Google Maps search tool for locating gauging stations and current data, click here.

Hydrograph 1 – A hydrograph with a steadily increasing baseflow, moving left to right.  Note the axes. Left is water level or stage height (metres). The right axis discharge (m3/s). The slow rising discharge from 2.75 m3/s on November 29th to 3.55 m3/s on December 2nd. This rise was from a small rain event of 5-6 m coupled with some snow base.

Hydrograph 2 – A hydrograph with a steady baseflow until a significant rain event late in December 26th. This event caused a spike in discharge from approximately 5 m3/s to 80 m3/s. This spike was from a large precipitation event of 15mm+ combined with a good snow pack, The rainfall when combined with snow melt caused this fast increase in water level. Shortly after this event freezing air temperatures slowed the melt and rising levels.

To make the most of hydrograph data anglers need to determine how their favourite rivers respond under different conditions. How can an angler do this? Go fishing!! While fishing your favourite river note the date, time of day, weather conditions, water level and water clarity. After a few trips anglers will be able to make some meaningful inferences about conditions from a combination of their past observations and real-time hydrologic data!

Error: Twitter did not respond. Please wait a few minutes and refresh this page.